Usha Rotary-screw compressors use two very closely meshing helical screws, known as rotors, to compress the gas. In a dry-running rotary-screw compressor, timing gears ensure that the male and female rotors maintain precise alignment without contact which would produce rapid wear. In an oil-flooded rotary-screw compressor, lubricating oil bridges the space between the rotors, both providing a hydraulic seal and transferring mechanical energy between the rotors, allowing one rotor to be entirely driven by the other. Gas enters at the suction side and moves through the threads as the screws rotate. The meshing rotors force the gas through the compressor, and the gas exits at the end of the screws. The working area is the inter-lobe volume between the male and female rotors. It is larger at the intake end, and decreases along the length of the rotors until the exhaust port. This change in volume is the compression. The intake charge is drawn in at the end of the rotors in the large clearance between the male and female lobes. At the intake end the male lobe is much smaller than its female counterpart, but the relative sizes reverse proportions along the lengths of both rotors until the clearance space between each pair of lobes is much smaller. This reduction in volume causes compression of the charge before being presented to the output manifold.
The effectiveness of this mechanism is dependent on precisely fitting clearances between the helical rotors and between the rotors and the chamber for sealing of the compression cavities. However, some leakage is inevitable, and high rotational speeds must be used to minimize the ratio of leakage flow rate over effective flow rate. 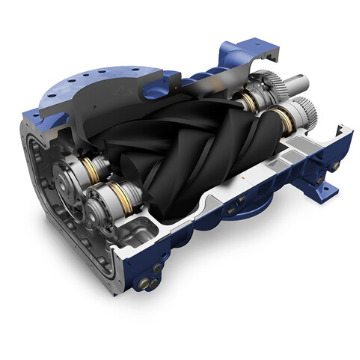 USHA COMPRESSORS is an International engineering, design and manufacturing company with over four decades of experience, providing the highest quality, positive displacement & centrifugal blowers along with vacuum pump products, for the global market. Our company and its products are recognized, as a world leader, exporting worldwide. We are very pleased to provide one of the largest capacity ranges of blowers and vacuum pumps.

Kindly COnnect with us

Kindly Fill Up This Form, Our Customer Suppport Team Co-ordinate with you Shortly